More than just a race

Marathon des Sables was more than just a race. It was incredible. There is so much I could tell you about it, but here is an overview!

During a six hour coach ride from Ouarzazate airport in Morocco to the start point of the race we were presented with ‘the roadbook’. The coach avidly scanned the book, I think many to see how long the longest day in the history of the race would actually be (92km)!

Eventually we pulled off the road, into the darkness……with head torches on we made for the bivouac to find our home for the week. Tent 115 ‘Yorkshire tent’ turned out to be a very happy place. The eight of us shared highs and lows and made fantastic memories – some painful – together.

So, these are the distances which we tackled and a few of the high and low points of each day.
Stage 1 – 36.2 km (22.6 mile)
At daybreak we were informed of a new time zone ‘race time’. It was actually only 6am when we thought it was 7am.

That left 3 hours till the start. Before we set off we formed a 30 shape to represent the 30th anniversary of the race. You can just see the Yorkshire flag in the bottom right of the zero. Then there was 30 minutes of race briefing/welcome from race organiser Patrick Bauer – in French. The English translation lasted about 1 minute. Good luck – stay safe! John and I got separated from the rest of our tent and ended up starting with some of our our tent neighbours.

We slowly caught and passed all our tent mates. Jay ran with us for a while. It took at least an hour to catch Fe and Simon. The stage started flat with some small climbs throughout the day. Tent mates Paul and Ben passed us again in a check point while we were having a routine change of socks (blister prevention). We later caught them again and spent an hour or so all together. Day one finished with a climb and a descent into camp. We ran strong into the finish. All of tent 115 back safe and not long between us.
Stage 2 – 31.1 km (19.4 mile)
This stage was stunning. A flat start and then a big climb. 360 panoramic views from the top. The scenery so dramatic and big. We soon had a river crossing and then a proper dune which turned into another big climb. We then set off in the now heat of the day across a huge plain surrounded by mountains. After a few miles we could see a check point, still miles away – there was a helicopter there which looked like something out of a kinder egg (so far away!). As we got closer we could still see no way out of this ‘bowl’ which we were in. But then we could see – along the right ridge of this dune and over the top! I reverted to a kid on an adventure and the excitement combined with knowing the finish was over the other side I ran ahead of John. The descent was brilliant, rough like a Yorkshire fell before a few km of little dunes which were lots of fun to ‘surf’ down. I finished the day with another Yorkshire participant and arrived back 3rd from tent 115. This was my favourite day of the race. 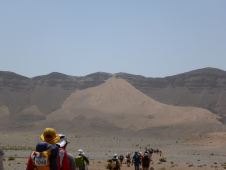 Stage 3 – 36.7 km (22.9 miles)
Wow – it was hot today. Really hot. The morning had lots of rocky terrain which was very runnable. Then we had to cross a huge cracked lake bed.

Before traversing plenty of dunes.

Again we finished with a decent climb and a descent to the finish. This time though the big climb wasn’t the last climb and over the summit there was another one! I decided I wanted to try and finish in the same time as the first day, so cracked on in the heat over the last few km, finishing only slightly behind the first day time, but much higher up the positions.
Again we spent plenty of time taking photos and I think JB even thought he was on his holidays!
Stage 4 – 91.7 km (57.3 miles)
What can I say about this. We started in 40 mph winds up a huge sand dune, not conducive to running so we conserved energy. The descent was awesome and made up for the hellish hour it took to get there! The wind settled a bit but it was tough going to CP1, so more walking. The windy weather meant I missed my morning cuppa. Once I realised that was probably the cause of my lethargy I popped some caffeine nuuns and felt much better. The day passed. The heat was immense in the middle of the day. Sunset was beautiful. We were by a ruin as the sun went down. It was really stunning. At the same time we stumbled on camel carcasses and to quote a fellow northern runner “even camels can’t survive here”! At 7pm head torches were compulsory and glow sticks were activated. Now we followed yellow glow sticks of people and green glow sticks of markers. After dinner at a check point and a scary encounter with a camel spider (like a scorpion but white) we pressed on. Dunes. Lots and lots of dunes. Hours and hours of dunes. Amongst the dunes was a checkpoint with deckchairs and sultan tea. It was so welcome but we didn’t stop long. At the next checkpoint we befriended Mark whose GPS emergency tracker had failed. The three of us trudged on like zombies through the night. Sunrise brought hope and life again. My legs which were agony with fatigue felt better. We were greeted by camels on what seemed like camel race track. Somehow we ran together the last km to the finish. It was nearly 7am. We needed extra direction to find the bivouac! It was in the same place as usual! Ben and Paul were already asleep. We were next back. Quick recovery shake, wash, change and sleep. 2 hours later I was awake and my legs were throbbing despite me sleeping with them raised on my bag. I got up and walked back to the finish line and sat wrapped in my sleeping bag watching people finish. It wasn’t until the afternoon that the remainder of our tent mates arrived back. I enjoyed the rest day and ate 3 meals which was a treat! Even better we all got a can of cold coke in the afternoon. At 8pm ish we all went to watch the last runners cross the line…..
Stage 5 – 42.2 km (26.4 miles)
The marathon stage. Today we started early, about 7:20 by the time Patrick had wished us all well. It was cooler and I felt great. So did JB and Ben. We ran together. We ran well all the way to CP2. No conserving energy up hill or in dunes. We just ran, except when we stopped for photos with wild camels! The ground was uneven and rocky but hard – perfect for a runner from Yorkshire! At CP2 I urged my running buddies to go ahead. I was fading and they were strong. It was nice to have time alone in some very pretty and quite large sand dunes. This is when the emotions hit. I had less than 15km till

the end of the Marathon des Sables and I felt good. I was going to do it!! After a few km of choking back the tears whilst walking and soaking it all in I started to run again. I passed people, including Graham Bell (he might have led me by a long way all week but now I was beating a former Olympian in a marathon!!). I encouraged my tent neighbour as we went into the last 5km. It was never ending but I just kept running! My recently (a mind game with myself in the final few km of the race to motivate me to keep running) set target being to beat my time from day 2 (which was 10km shorter). The finish didn’t arrive. Garmin said 42 km and no finish in sight. I stopped looking at garmin and kept running. Eventually I summitted a rise and the finish was there – only a few hundred metres more. I crossed the line. I had finished the marathon des sables!!
I missed my fastest stage time by a few minutes but I was ecstatic! All my tent mates finished too. That evening we were  given a can of beer and we celebrated together. We did it!
And then we had to do the Charity stage – 11.5 km (7 miles) – this is not officially part of the MdS but it was

compulsory! We were still in self sufficiency mode too so still no shower in sight. For this day we were all given a clean t shirt! As a tent we walked together. It was so good to be with the team who I had shared this journey with.

Since I have been back there have been a few reoccurring questions that I am asked, so in case you are wondering too:

How do you feel?Are you aching?
I have been super tired, but no aches and pains to report. I am feeling about back to normal now.

Did you get to meet Ranulph Fiennes?
Ran was in the tent next door but one so we saw him most days. He seemed a very lovely man. Here is a picture with Ran and his coach Rory at the start on the first day.
Was it really ‘the toughest footrace on earth’?
During the long stage I realised that yes it probably was! The culminative effect of the previous days running, sleeping under canvas in the wind and the calorie deficit combined with an absolutely hellish route was pretty punishing. That said, I haven’t completed any of the other races also claiming this title, so can only conclude that it was certainly tough.
Did you get blisters?

A small one on my little toe. This is it on the bus ride back to Ouarzazate. It popped in the shower at the hotel and disappeared for good.
Would you do it again?
Absolutely! The camaraderie of camp life was unbelievable. I have laughed so much. Race organisation was spot on (aside from lots of queueing) and the scenery was out of this world…..But I am in no rush – there are plenty of other places to go and see first….
So what’s next? How will you top this?
I don’t know yet! For now, I am going to enjoy the sofa and relish in the feeling of completing the Marathon des Sables.

Well it’s finally here. I leave for the airport today! I can’t seem to find the words to articulate how I’m feeling right now. There is a mixture of emotions but mostly I am excited…..

To track me and send me messages you will need my full name and race number:

Once the race starts you should be able to track me at http://mds.vigeosport.com

To send messages visit http://www.marathondessables.com and follow the instructions to support your competitor! You need to put my name and number in the email subject or I won’t receive it.

To see how my training buddies are getting on – here are their names and numbers:

Thank you all for your support and encouragement along the way. I feel like I have hundreds of people behind me in this adventure – thank you! Mostly thank you to James for putting up with me – especially the last 6 months while this race has dominated my life!

Next time I write I will have finished……